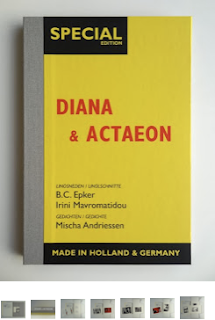 Diana en Actaeon
Three artists have taken one of the best stories from Ovid's Metamorphoses as a starting point for their work. It is about the power of looking and being looked at, unintentionally breaking the taboo, and the way it enchants and transforms the viewer. Quote: "And yet consider why the change was wrought, You'll find it his misfortune, not his fault; Or, if a fault, it was the fault of chance: For how can guilt proceed from ignorance?" (Ovid. III 141-142).

Mischa Andriessen (1970-NL) writer, translator, reviewer. Publishes regularly on jazz and the visual arts. In 2008 he debuted at Publisher De Bezige Bij with a volume of poetry Uitzien met D, which was awarded the C. Buddingh' Prijs. In 2012 his second volume Huisverraad appeared also at De Bezige Bij and this was awarded the Mr J.C.Bloem-Poëzieprijs in 2013. More info: www.mischa-andriessen.com

Irini Mavromatidou (1971-DE) visual artist. In 2010 she received a scholarship from the Aldegrever Gesellschaft. Graduated in 2012 from the faculty of Graphic and Communication Design of the University of Applied Sciences in Bielefeld (DE). Her work has been exhibited at Galerie Kurt im Hirsch Berlin, Kunstverein Emmerich, Kunstverein Höxter, Leipziger Buchmesse and Stadtmuseum Borken. More info: http://irini-mavromatidou.de

B.C. Epker (1968-NL) draughtsman, printmaker. Showed his work i.a. at GEM and Gemeentemuseum Den Haag, Fries Museum Leeuwarden, Stedelijk Museum Schiedam and in many other places in Europe and the United States. Received the Gerrit Benner Award for Fine Art in 2006 and has taught at various art schools and mastercourses in the Netherlands and the USA. More info: www.epker.nl 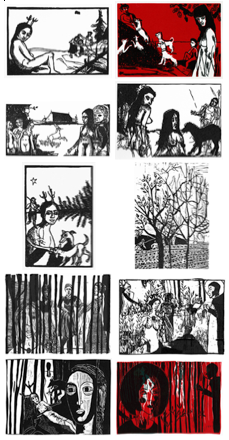